Tying together SHIELD and Civil War

There's been some speculation recently as to whether the events in Marvel's Agents of SHIELD will have any sort of direct tie-in to what happens in the upcoming Captain America: Civil War, as shown in a recent interview with Clark Gregg:


“Civil War has always been about the registration of superheroes and people with powers. I suspect what we’re doing will connect with that in some way,” Gregg says. “What I like about what Marvel has done with our show is we explore a broader part of what’s going on in that stuff. Sometimes it connects in a big way. For instance with Winter Soldier, you’re seeing more hours of that dynamic, of suddenly realizing seeing people you’ve worked your whole life for are part of this evil organization trying to kill you, that personal betrayal we get to play out for hours more.”

After all, we've seen tie-ins with the movies before, such as the big one where the show was completely changed (much for the better) after Captain America: The Winter Soldier, and just this week, when they showed the son of Baron von Strucker (who was killed in Avengers: Age of Ultron) being recruited to help run Hydra. 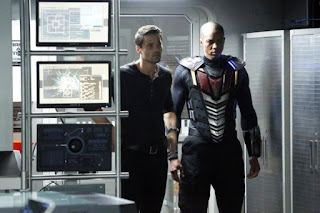 But in regards to Civil War, and the Superpower Registration Act (or whatever it ends up getting called), I would submit that the television show has already paved the way for the necessity of such a law. Having nothing to do with the show's introduction of the Inhumans, the terragen-infused fish oil creating super-powered people all over the world, or anything else.

The Superpower Registration Act will be necessary because SHIELD is no longer able to maintain "the Index".

The Index was SHIELD's list of all individuals with super-powers, and was one of the ways they were able to control knowledge of the existence of such people among the general public. If something weird happened, SHIELD could cross-check the Index for anyone who might be able to do such things, and be all the closer to putting a cork in them. For those who were less easily controlled, SHIELD also maintained several prison facilities, including the Fridge, which we saw emptied of inmates after Hydra's existence was discovered.

I think that's going to be one of the big motivations for the creation of the Superpower Registration Act, or at least one of them. It makes sense that, once SHIELD isn't able to do the job, conventional governments will want to do it, using the big incident supposedly at the beginning of the new film as a pretext.