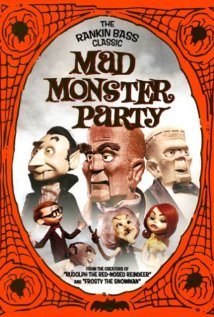 Remember all those Rankin-Bass stop-motion Christmas specials? Santa Claus is Coming to Town, Rudolph the Red Nosed Raindeer, The Year without a Santa Clause, and so forth? Well, did you know that they also did a Halloween one - a full-length feature film (that was actually in theaters!) with just about every movie monster known?

Well they did. And it was called Mad Monster Party.

Like those other stop-motion specials, Mad Monster Party featured a full soundtrack of original songs, like "You're Different" and "Do the Mummy", and as might be expected had a lot of bad puns and awful jokes, but it didn't matter because it was aimed at kids, who would just eat the stuff up anyway, like I did.

Boris Karloff did the voice of Doctor Frankenstein, who, having made his greatest scientific achievement (an ultimate explosive), decides to retire. He invites all of the great monsters (Dracula, the Invisible Man, the Monster and his Bride (voiced by, and looking like, Phyllis Diller) the Mummy, Wolfman, Dr. Jeykell, Igor, etc. etc.) to his island to name his successor. In addition, he invites his hapless nephew Felix Franken, who provides a lot of the comedy through his not realizing what's going on around him. It's a hoot in general, with the monsters trying to kill Felix to keep him from being named Frankenstein's successor, and then the whole thing is interrupted by King Kong coming to the island, complete with a fight against zombie-piloted biplanes. The film ends with the island and all the monsters being destroyed, with just Felix and Francesca (another of the Doctor's creations, but that's not made clear right away), and the implication that Felix is just another creation as well.

The songs are corny, as is the comedy, but when you're of the right age, it's a blast. And looking back on it (it's available on DVD ridiculously cheap) it still holds up fairly well as a light bit of fun. Definitely keep an eye out for it.

Email ThisBlogThis!Share to TwitterShare to FacebookShare to Pinterest
Labels: 31 Days of Halloween, films