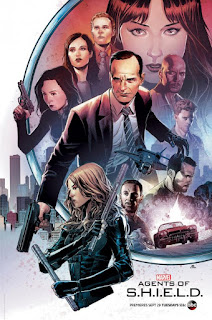 A lot of people bailed on Marvel's Agents of SHIELD during its admittedly shaky first season. None of the fans knew it at the time, but the uneven pacing of the first half of season one were entirely due to the need for the show to link up with the release of Captain America: The Winter Soldier. Once that big reveal happened, the show really picked up.

The second season was consistently good and well paced, and if the third season premier is any indication of how the rest of the season will go, it's going to continue the trend. And this despite the fact that it is absolutely, clearly, and undeniably setting up the events of next year's Captain America: Civil War. And 2019's Inhumans.

Spoilers after the jump.


The show picks up almost immediately after the events of the season two finale. The Terragen mists have been released into the sea, and are showing up in fish oil supplements (minus the deadly effects for non-Inhumans, which are hand-waved away). Those with Kree DNA who take the fish oil are developing powers at an alarming rate. 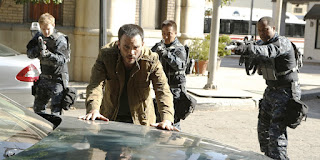 And right out of the gate, we see there's a rival for these super-powered people to SHIELD. A special ops team is trying to capture Joey Gutierrez, who can suddenly melt or bend metal or something, but they're stopped by our SHIELD team, led by Daisy (née Skye), showing off her own earthquake powers. They extract the new Inhuman, get a picture of the leader of the opposition, and think they have the upper hand.

Tracking down the enemy leader (who apparently has a different alias in every government agency she's ever worked, but is known to our folks as Rosalind), it turns out that she's every bit the super-spy that Coulson and crew are, and has set a trap-within-a-trap for them. She boasts about her power within the government, and sure enough, President Ellis (again played by William Sadler, reprising his role from Iron Man 3) echoes a phrase she uses in a speech to the nation outlining the new Inhuman threat, and the new agency he's authorized to deal with it; the Advanced Threat Containment Unit. Not only does the ATCU have several Inhumans in custody, they also have a number of bodies, and each side thinks the other is responsible.

But it turns out we've also got another player on the board; a new Inhuman is on the prowl, apparently named Lash, and he turns up at a hospital where Link (from season two) is hiding, cutting through walls and generally making a mess of things. In the comics, Lash is on a mission to judge and kill Inhumans accidentally exposed to the Terragen mists who aren't worthy of the change. It seems on the surface that he's on the same mission here. Which means either he's working for the Inhumans we already know about in Afterlife (unlikely), working on his own (also unlikely), or working for some other faction. My money's on the latter - a different faction of Inhumans somewhere.

Finally, Fitz is still obsessed with finding Simmons (who was sucked into the alien obelisk at the end of the last season), and gets to show off his newfound spycraft skills in trying to track down something that might give a clue. It was a nice extension of the training and experience we saw him getting (under Ward's tutelage, I note) in the first two seasons. He gets the clue, kills and avoids some bad guys, but it turns out to be nothing more than the Hebrew word for death. No idea what that could mean...

Finally, we get snippets on both Ward (who's trying to get Hydra up and running again after the events of Avengers: Age of Ultron and season two of Agents of SHIELD) and Simmons, who's trapped on some alien world being stalked by something.

On that, bear in mind what we know about the Inhumans in the show. They're the result of a Kree experiment in ancient times, to try to create soldiers for the Kree. They were deemed too dangerous, and pretty much obliterated. Does that make the obelisk a lovely Kree parting gift, left behind to take any surviving hybrids and transport them to a prison planet someplace to be killed? Makes sense given what we already know. 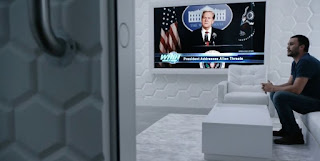 I especially loved the name-dropping throughout the episode. Sokovia (Age of Ultron) and Pym Particles (Ant Man) both got mentioned in passing, and of course the use of President Ellis was a great call-back to Iron Man 3.

The ATCU is something of a mystery at this point. There are a few similar organizations in the comics (HAMMER and SWORD come to mind) designed to protect humanity from superhuman/alien threats. But it's obvious that Rosalind knows all of SHIELD's secrets; she deliberately mentions TAHITI, indicating she knows things only three people in SHIELD should know (unless, of course, TAHITI was in that huge data dump that Black Widow did at the end of Winter Soldier...). And it also begs the question, if Hydra was able to so thoroughly infiltrate SHIELD over the years, would they maybe have been able to do the same with the ATCU, or whatever was its precursor? I wouldn't be a bit surprised.

On the whole, a great initial outing. It moved some of the plots from last season along very well, gave us teases of two other plot threads, and seems to be on a trajectory to link up with the next Captain America film. And considering how much better the show got once that happened the first time, I have high hopes of yet another "Oh no they'd DIDN'T" moment come May.