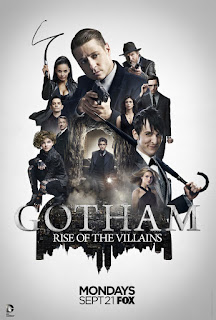 A lot of people didn't like the first season of Gotham, saying that it was campy, or uneven, or poorly plotted. I was not one of them. I liked the show from the beginning, because I felt the best way to look at it was not as a Batman prequel (which is how it's been marketed) but as a police procedural/ mobster show with really quirky characters.

The second episode of the new season, "Knock, Knock" picks up where the first episode left off. A bunch of the worst of Arkham Asylum's inmates have been broken out in order to form a team whose antics are apparently intended to throw Gotham into chaos for its own sake. I'm sure that the mastermind behind it all, Theo, will have some broader plan in mind, but for right now we're going for chaos.

Spoilers below the break

And boy, chaos we do get! First, Theo has kidnapped the hapless mayor, instructing him to pretend to his secretary that he's fine and simply gone off for a while, and "instructions will be forthcoming", leaving the city effectively in Theo's hands. Jerome and the rest of the Maniax, as they call themselves, have started their run of chaos by first tossing people off of a roof, then attempting to burn a bus full of high school cheerleaders alive (only to be thwarted at the last minute by a newly-reinstated detective Gordon), and finally by staging an assault on Gotham police headquarters, killing dozens of cops and the new police commissioner, who was Gordon's champion. 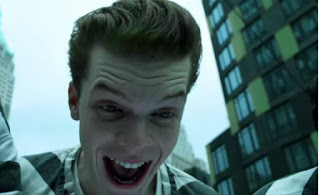 Meanwhile, back at stately Wayne Manor, Bruce and Alfred have discovered Bruce's father's computer, which holds all of the dirty little secrets he had dug up about Wayne Industries over the years. Alfred destroys it to protect Bruce, Bruce fires him, Bruce unfires him and agrees to resume his training under Alfred's tutelage, and a new ally and former friend of Bruce's father, Wayne Industries own Lucius Fox, is brought in to fix the computer (with Alfred breaking into an over-the-top "I'm a harmless eccentric old Brit" routine to get Lucius to talk with him at first).

The episode ends with Bullock coming out of his brief retirement as a bartender and rejoining the force, to help Gordon take on, or take out, the Maniax.

This season is definitely stronger than the first. Not only have the writers learned that longer story arcs are more interesting than "villain of the week" pieces, but the violence has definitely been ratcheted up. The writers and producers definitely seem to have learned from their mistakes, and the show is much, much better than the first season, which I thought was pretty good. We're seeing interesting villains being given the time to develop, not only on their own but between one another (the scene with Jerome and the cannibal playing Russian roulette was wonderful - Jerome is stealing the show so far, the same way Penguin did in the first season).

This episode definitely left me wanting more, without a particular cliffhanger. Which is what a good show should do.