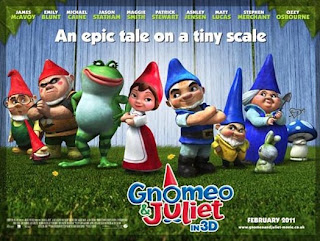 When I first saw the previews for this movie I was dreading it. Alas, one of the downsides of having a nine year old daughter is being dragged to every animated film that gets vomited forth from the garage of some wannabe filmmaker with a PC.

I've got to say, I was wrong. This was a really fun film.

To say that Hollywood has the technical side of this sort of film down pat is an understatement. It's visually flawless, a tribute to films that have gone before it such as Toy Story and Shrek. That's one of the things that makes these sorts of movies so tedious; since they're so easy to make from a technical perspective, everyone thinks they can make good movies.

I won't bother with reiterating the plot. If you can't figure it out from the title, well... Garden gnomes come to life only when people aren't looking, and they tend to the gardens in which they are placed. They share their owners' antipathy to one another. And one of the blue gnomes from one garden falls in love with a red gnome from the other garden, and the rest is history. Or at least a good movie.

What sets G+J apart is both the writing and the voice-acting. The writing does what all movies of this sort should do; it works on several levels. I know for a fact that many of the jokes in this film went straight over the heads of the kids in the theater I saw it in; the adults were the only ones laughing. You could easily turn this into a drinking game; "Every time there's a Shakespeare reference, take a drink." The film takes place mostly in the garden of house #2B, with the adjoining house having the same number, but with a circle and a line through it. (Get it?) You'll be sloshed before the end, I promise you. And that's in addition to the more standardly adult-type jokes that are sprinkled in (the gnome with the Borat speedo singing "I've got a lovely bunch of coconuts..." for example).

But what really sets this film apart is the voice talent. These aren't Hollywood voiceover hacks-- these are real actors. James MacAvoy is Gnomeo and Emily Blunt is Juliet. But it also has a lot of talent in the secondary characters-- Michael Caine, Matt Lucas, Ozzy Ozbourne, Dolly Parton, Patrick Stewart (as the statue of William Shakespeare!), Maggie Smith, and more. They really seem to be having fun with this film, and it shows in their performances.

I should also point out the score by Elton John. Not only does it feature some of the classics you'd expect to see in a film of this sort (Crocodile Rock, Saturday Night's All Right for Fighting), but new songs written especially for the film. Plus the incidental music mostly plays on familiar Elton John themes. I found it extraordinarily apropos.

The audience I saw this film with was mostly composed of younger kids and their parents, and both were laughing (albeit mostly at different times). I would definitely recommend it; it stands out from the crowd of non-Pixar animated films as one of the best. You'll never walk through a garden store the same way again.