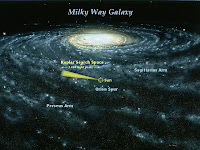 According to scientists working with data collected from the Keppler Space Telescope, the Milky Way galaxy has approximately 50 billion planets, including 500 million in the "habitable zone" around their stars.

Borucki and colleagues figured one of two stars has planets and one of 200 stars has planets in the habitable zone, announcing these ratios Saturday at the American Association for the Advancement of Science annual conference in Washington. And that's a minimum because these stars can have more than one planet and Kepler has yet to get a long enough glimpse to see planets that are further out from the star, like Earth, Borucki said.

The implications for sci-fi games are obvious. I haven't checked any of the games I have at home, but I wonder how close some of them come to those ratios in their own world-building systems. 50% chance for a star to have planets, 0.5% chance for a planet in the habitable zone. Grist for the mill of a scifi RPG design...