Yes, Hulk is teaming up with Thor 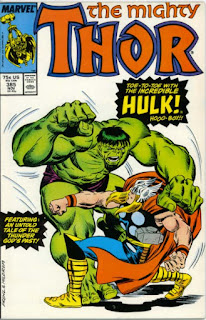 Now it's official, apparently. Thor 3: Ragnarok, will have Mark Ruffalo's Hulk (and, of course, Bruce Banner) as a co-star.

Personally, I think this is a great idea. So many people were gushing about the Bruce Banner/Tony Stark bromance in the first two Avengers films, but I think the warrior camaraderie of the Hulk and Thor has just as many opportunities. The good-natured deadpan Hulk smash into Thor's head in the first Avengers movie was, I think, an indication that there was a certain respect between them, warroir to warrior.

Looking forward to seeing how this plays out. Marvel has (rightly, I think) figured out that Hulk doesn't work as a stand-alone film character, and the rights issues I'm sure don't help matters. I'd love to see the Hulk showing up across the MCU. Seems the best way to use the character.

At least there's some bit of good MCU news, now that the rumor about the Fantastic Four has been squashed!