Gotham just keeps getting better and better. This season's theme is "rise of the villains" and we're really getting a taste of what that means. There's not much to say without giving away plot twists, so let's go below the fold for spoilers.

So much for the fan theory that Jerome is the Joker.

Synopsis: Jerome and Barbara attack a children's hospital gala, presumably to maintain their reign of chaos and terror over Gotham. Bruce and Alfred are there, and Bruce is targeted as Jerome's first "official" victim (he killed the deputy Mayor as a sort of warm-up, leaving big-bad Theo Galavan with the mayor in a box and his control of the city tightening). We also got some idea of Galavan's motives; apparently his family was instrumental in building up Gotham, but has gone unrecognized (presumably as a counterpoint to the Wayne family, whose name is quite prominently known). When Jerome has a knife to Bruce's throat, Galavan comes in, with the TV cameras fully trained on him, and saves the day, plunging a knife into Jerome's neck and saving Bruce. All nice and neat, if a little predictable. The episode ends with Bullock visiting Penguin with a warning; put any sort of heat on Gordon, and Bullock will take it out on Penguin. 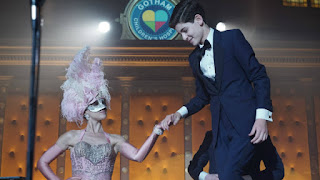 This was a terrific episode, and the suspense at the children's hospital gala was set up very well, with the "false start" with Bruce in the magician's box. The byplay between Bruce and Selina seemed a little unnecessary, but did give Gordon a way to get into the theater unnoticed. The humorous scenes where Alfred is coming on to Leslie (Gordon's girlfriend, although he doesn't figure that out until the very end) were also very well done, and end up being bittersweet as well as funny. Well done.

The weakest part of the episode was Galavan's plan. It was a bit obvious, and his speeches in front of the camera were (quite obviously, and from a direction standpoint intentionally) stilted and melodramatic, but perhaps that will come out later as a tell that the whole thing was set up from the beginning. I am a little sorry to see Jerome go, but in a way he was getting a little too much like the Joker, and if the plan was to have him just be a "proto-Joker" who will later inspire another (the little kid watching on TV and laughing as people get killed, perhaps?), getting rid of him now was probably the best move. The scenes at the end where people were sort of imitating him and knifing people were quite chilling and effective.

On the whole, Gotham is definitely on a roll. Looking forward to next week.