Review: Doctor Who S9E3 "Under the Lake" 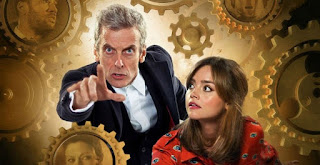 This week's episode of Doctor Who brought us back to two things that "new Who" doesn't do all that often. First, it takes place on Earth, but in the future. That's happened a handful of times, but it was a pretty common occurrence in classic Doctor Who. Second, they've returned to one of the classic Doctor Who tropes that we've really only seen twice that I can think of off the top of my head (Nightmare in Silver and Last Christmas); the isolated base being besieged by mysterious aliens. That was one of the go-to plots for the Second Doctor's era, and it's nice to see it making something of a comeback.

Spoilers below the fold.

We find ourselves in an underwater base, an abandoned military outpost about to be used as an oil rig, which itself is in the middle of a town that was flooded when a dam burst (and that must've been some flood, because they're so far under the surface light can't reach them). It's the year 2115, and there's a handful of military types (one of whom knows what UNIT is, and knows who the Doctor is, which is... odd) and one smarmy company man. Sort of the same set up as we saw in Aliens. 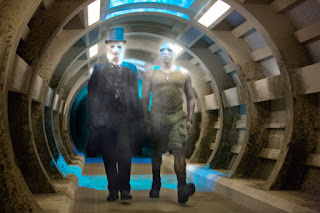 They've recovered some sort of alien spacecraft, with weird letters carved into the interior, and after one of the soldiers is killed, he and another (alien) ghost start haunting the place and trying to kill the survivors, who manage to hide in a Faraday Cage (which blocks all electromagnetic waves). The Doctor and Clara come in, muck around a bit trying to figure out what the ghosts are, determine they really are ghosts that are being used to transmit a homing signal of some sort, and the Doctor goes back in time to the point where the alien spacecraft landed. The episode ends with the Doctor coming back as a ghost himself, meaning he died when he went back.

Spooky stuff, and very effectively done. The Doctor is being written now as if he's got Asberger's Syndrome, to the point where Clara has even made up cards for him with soothing "normal" things to say to people. It's a bit weird, and not only doesn't match with what we've seen of this Doctor in season eight, but with the Doctor at all. I know they're deliberately trying to go more humorous, but he's more than just gruff and acerbic; he's downright unlikable. Let's hope they manage to soften those edges soon; that approach didn't work for Colin Baker, and it's not going to work for the first old Doctor after Smith and Tennant.

On the whole, this was a very good episode. The ghosts definitely work as a villain, the puzzle was neatly laid out, and the situation is a great call-back to Classic Who. Looking forward to the finish.

Email ThisBlogThis!Share to TwitterShare to FacebookShare to Pinterest
Labels: Doctor Who, Television