Variety reports that ABC is working on a pilot for a new Marvel television show, based on the "Damage Control" comic series. While other ABC Marvel shows (Agents of SHIELD and Peggy Carter) have been dramas, Damage Control will be a single-camera comedy. I'm sure there will be those annoying "The Office"-like asides, and plenty of goofy jokes.

In the comics, Damage Control is a company (originally owned by Tony Stark and Wilson Fisk, then later financed through SHIELD) that goes around doing, well, damage control after all those big building-busting battles. They rebuild buildings, recover lost affects, reschedule wedding receptions, and are always ready with a bill (they once tried to bill Doctor Doom for the damage he caused). 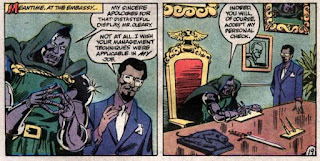 I'm pleased, though, because this could serve to demonstrate that even though the Marvel properties work on all sorts of different levels, they can still all co-exist within the same broad framework. Be interesting to see if they can pull it off.