I'm actually a little conflicted about whether to include spoilers in this review, since the trailers have done a pretty thorough job of revealing some of the bigger plot twists. I'll try to keep them to only what's been revealed in the official trailers.

First off, I should say that I'm a huge fan of the Terminator franchise in general, and was sorely disappointed by the third and fourth films. Although it's not a perfect film by any stretch, this latest film in the series does redeem it in many ways. I saw it without 3D or IMAX.

The basic plot is that Kyle Reese (from the first film) is sent back to 1984 to stop the original T-800 from killing Sarah Connor, but discovers almost immediately that the 1984 he's expecting no longer exists, because the timeline has already been changed by another time traveler.

To my mind, the first 45 minutes of this film, where they recreate and then completely mess with scenes from the first two films, are the best part. They do a credible job of recreating the scenes, and the CGI young Arnold Schwarzenegger is simply stunningly well done; MUCH better than the halfhearted attempt in Terminator: Salvation. (They couldn't actually reuse scenes from the earlier films because of legalities.) There don't seem to be any shouts to the wonderful Sarah Connor Chronicles television show, which is really a shame. A cameo by Summer Glau as a terminator would've been amazing. (For that matter, so would have a cameo by Bill Paxton as an older punk, now all grown up once he wasn't killed like he was in the original film.) 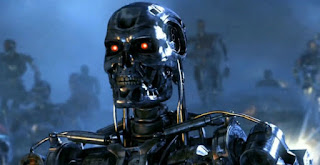 The later hour-plus of the film is somewhat self-contained and still quite enjoyable (I'll not reveal the specifics of what it's about, since that seems to have escaped the spoiler-happy marketing folks, other than the fact that they did the one thing left to do in the series villain-wise, and took the one man who's been the legendary hero all along, and turned that expectation on itself), but doesn't quite have the resonance of the first portion. There is some mumbo-jumbo about being able to remember things from alternate timelines, but once you just give up and say "it's just how the tech works" then you'll be a lot happier. It's time travel, which forgives many sins, and opens up all sorts of things that don't make sense until you really think about them, then they do, then you think about them some more and they're back to not making sense. Just keep telling yourself, "it's just how the tech works."

The film is long on action sequences, and they're very well done, but short on the long character-filled pauses that made the first and second films so memorable. They try to cram all of the chemistry of Linda Hamilton and Michael Biehn into a single scene, and it just doesn't work. And the father-daughter thing they're going for between Schwarzenegger and Emilia Clarke (the new Sarah Connor) seems forced. Rather than have her keep talking about it, it would've worked much better if they had taken half the time to just show it. 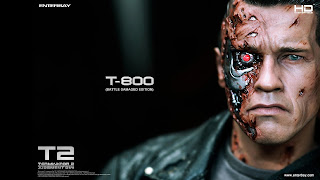 Schwarzenegger is a treat to watch here, playing on a lot of old expectations, doing the stoic machine/father that Sarah wanted for John in the second movie to perfection, recalling lots of old lines and scenes and obviously having a ball with it. Emilia Clarke seems to have been cast mostly because of her resemblance to Linda Hamilton (there are a few scenes where the resemblance is uncanny). J.K. Simmons is great as a cop whose life is completely overwhelmed by a chance encounter with the whole notion of time-traveling killer robots, and Jai Courtney (the new Kyle Reese) seems to have been cast because... well, I'm not really sure why. He sucked. Comparisons with Michael Biehn are going to be inevitable, and he can't hold a candle to the original.

On the whole this is a worthy entry in the Terminator franchise. It's certainly not as good as the first two films, but it's easily better than the last two. I'll give it three stars out of five, right in the middle.

There is a helping of schawarma in the middle of the credits. Some people seem to think it was difficult to understand, but it made perfect sense to me, in context. Make sure to stay for it.