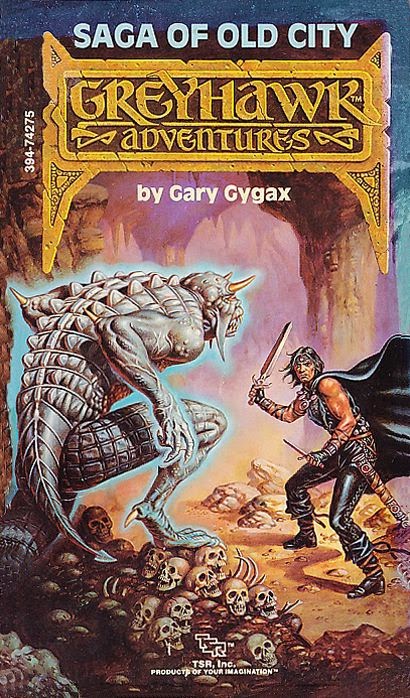 At last I come to the series of novels and stories written by Gary Gygax, featuring his hero Gord. The first in the series is Saga of Old City (1985), which was released as part of the last gasp of products written by Gygax right before his ouster from TSR.

Saga of Old City charts the early life of Gord, a beggar, thief, acrobat, and adventurer from the slums of Greyhawk's Old City (hence the title). Interestingly, though, only the first part of the novel actually takes place in Old City, although there is a satisfying denouement that brings the hero back there.

Rather than presenting a single plot, the book is episodic, broken into several stories with connective tissue bridging them together:
This episodic nature really gives the book a feel like you're reading an adventure straight from Gygax's table. The writing is unmistakably Gygaxian, with its sometimes-stilted prose that uses obscure and archaic words that at times make you stop and work out the meaning from context, but I find it all the better for all that. The central characters are well-defined, and the secondary characters feel like NPC's; given enough detail that they are differentiated from one another with little trouble. Even no-name bandits feel different from one another.
There's also a short afterward, in which Gygax covers the game mechanics behind some of the characters and things in the book. So he explains Gord's stats and level in game terms, goes over some of the magic items, and gives a brief general overview of how he envisions the sort of campaigns shown in the book:

Events that occur as Gord travels across the lands around Greyhawk City, the Nyr Dyv, and elsewhere int he Flanaess ... are as they might happen to adventurers traveling the same places in my campaign. Encounters are not frequent in civilized places, for mankind has a way of ridding itself of unwanted monsters and bothersome pests of dangerous sort. The high road of adventure is an amalgam of medieval travel and confrontations with human-type enemies; occasional monsters to add spice are put in by the pinch rather than liberally sprinkled with unrealistic abandon.

The details about the World of Greyhawk contained in the book are vast. From NPC's to streets, obscure villages to the layout of cities, there is a wealth of detail herein that any DM interested in running Greyhawk should want to have at his fingertips. There is no particular date given (although it is stated that the events in the book take about eight years), but it is mentioned that Nerof Gasgol is mayor at the time of the war between the Thieves and the Beggars, and Arentol is guildmaster of thieves a couple of years after that, plus the Horned Society is still extant, which places it somewhere in the late 560's to early 580's. Given that 576-578 was the "default" time period when the book was written, it's not a stretch to place the book then.
On the whole, this is both an excellent book in its own right, as well as being enormously valuable as a source of Greyhawk trivia and detail. I rate it five wizards out of five.