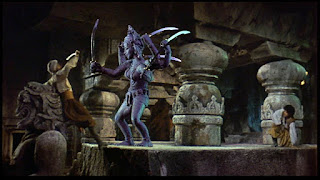 This is particularly sad for me, as I grew up on Mr. Harryhausen's stop-motion cinematography when I was growing up. My own personal "Appendix N" would be stuffed to the gills with films like the Golden Voyage of Sinbad, It Came from Beneath the Sea, Jason and the Argonauts, and First Men in the Moon.

The images are definitely not in the uncanny valley; you can tell they're not real. But there's a certain quality in that slightly-too-fluid movement, a beauty in knowing that for every single frame of film, a human hand moved a piece of macroture a fraction of an inch, that just gives them so much "feel" that they blow away more snazzy computer effects of today.

On this day I shall watch a Sinbad film, and grieve for the loss of a fantasy pioneer.

UPDATE: R.J. over at Gamers & Grognards proposes that this Friday be a memorial Ray Harryhausen blogfest day. I think that's a spiffy idea. Spread the word!