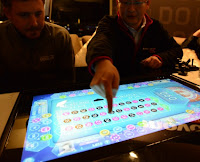 From the Associated Press:

Dismayed that family members are spread out over the house, each with a separate PC or tablet? Lenovo has something it believes will get them back together: a PC the size of a coffee table that works like a gigantic tablet and lets four people use it at once.

Lenovo Group Ltd., one of the world's largest PC makers, is calling the IdeaCentre Horizon Table PC the first "interpersonal computer" - as opposed to a "personal computer."

At first glance, it looks like a regular all-in-one machine in the vein of the iMac: It's a 27-inch screen with the innards of a Windows 8 computer built into it, and it can stand up on a table.

But you can pick it up off the table, unhook the power cord and lay it flat for games of "Monopoly." It's big enough to fit four people around it, and the screen can respond to ten fingers touching it at the same time.

There's more at the original article, but the implications for tabletop gaming are clear, and even alluded to in the article. Where monstrosities such as dedicated gaming tables have fallen flat in terms of finding a market, this device might actually have a chance. It's going to start retailing this summer at $1,699, but doubtless that will come down in short order, and discounted prices will be had online as well.

Imagine something like that for playing Cataan. Or displaying a dungeon map, or battle grid with markers for characters and monsters, able to be manipulated in real time by tapping the screen. If this thing does catch on, it veritably screams for someone to put together an application to facilitate generic dungeon crawls, or even system-specific facilitators. Heck, right off the bat it could be used to display large flat image files, which could be good enough for battle-mat applications.

I'll be interested to see whether this gets any traction. It's a high price point, but there's lots of potential there.