The Hobbit: An Unexpected Journey

I got to see the newest release in Peter Jackson's Middle Earth franchise; The Hobbit: An Unexpected Journey. I saw it with some folks from my Adventures Dark and Deep campaign, and we saw the plain-Jane version. No 3D, no 48 fps. Just a regular movie.

I have to say I went into this having read a number of bad reviews and was expecting to be disappointed. I came out having really enjoyed it. It's not a perfect movie, but few are, and I thought it compared very favorably with the Lord of the Rings films, all of which I love. I'm also a fan of Tolkien's written works, and have read both The Hobbit and LotR many, many times, so I'm aware of the variances between the books and the films. (For what it's worth, I'm a fan of the Rankin-Bass animated films, but not the Ralph Bakshi film; I'm not a fan of rotoscope.)

I didn't see the pacing problems that many reviewers complained of, especially in the first half to two-thirds of the movie. I thought it moved along well, didn't find the dwarves' feast at Bag End to be overly long, and it didn't feel at all bloated to me. The music was good, recalling many of the themes from LotR as appropriate, but it never seemed to get in the way. And there were several songs sung in-character which really helped establish a more "fun" tone. I did not find the addition of the Necromancer of Dol Guldur to be overly intrusive (but see below) and actually fits in well with the rest of the film, especially if it's seen in the context of setting up the LotR films.

The trolls were great (nice to see them finally not portrayed as utterly mindless), and I thoroughly enjoyed Goblintown, and thought the visual juxtaposition between it and both Moria and Eriador (the lost kingdom of the dwarves which Thorin and company are attempting to reclaim from the dragon Smaug) was excellent. Where the dwarvish cities feature stone arches, staircases, and flying buttresses that seem that they have and will last for ages, Goblintown has rickety wooden scaffolding.

The scenes with the Great Goblin were very good, too, I thought. Humorous, but not overly so. The Gollum scenes were a highlight; if anything Peter Jackson's team has gotten better at their motion-capture CGI technology, and the scene was written perfectly and quite suspensefully. I noted that Gollum's eyes in certain light reflected as large pale orbs without any pupils, and that was both really creepy and effective. I half expected to hear Brother Theodore's voice when he first spoke.

As I say, it's not a perfect movie, and purists are sure to howl at some of the changes. There's a new sub-plot where an orc chieftain, Azog the Defiler, has a grudge against Thorin and his family (Azog was a very minor character in the larger Tolkien corpus, but never appears in the book version of The Hobbit), and we see a string of fight scenes between Azog's forces and the dwarves. After a while, they became somewhat predictable. And maybe I'm just not getting the chronology, but looping in the attempt to reconquer Moria just didn't make sense to me. Plus it doesn't seem to have any real purpose other than to give an excuse to include a couple more fight scenes. The sweepy-flying camera angles were a bit distracting and annoying, as were the very-fast-choppy cuts in the fight scenes.

And Radigast the Brown, with bird crap trailing in his hair and down his face, I could have done without completely. I am naturally predisposed towards Sylvester McCoy as a Dr. Who fan, but honestly he was goofy for the sake of being goofy and the character didn't really add anything to the story. Any stray woodsman could have conveyed the story of the Necromancer (or, hell, for that matter Bjorn, whom we will presumably see in the next film). 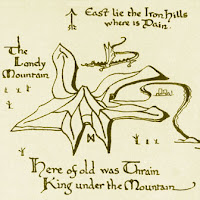 The biggest problem I had was that a good third of the dwarves didn't look very dwarf-like. One expects dwarves to have exaggerated features and prominent beards. Most did, but others just looked like short humans, Thorin unfortunately included. It was distracting.

On the whole, I thoroughly enjoyed this film and don't think it dragged at all. I didn't find most of the additions annoying (with the exception of Radigast), but some were obviously for the sake of adding more action (Azog). I would definitely see it again, and am looking forward to taking my daughter (age 11). I reserve judgement as to how it ranks compared to the LotR films until I see the other two in the series, as context is vital. But this is a great fun film. See it and judge it on its own merits, and you'll probably be pleased.

----------
What would Dungeons & Dragons have looked like if Gary Gygax had been allowed to keep developing it? Please, if you haven't done so already, consider supporting my Kickstarter for the Adventures Dark and Deep Players Manual, going on now through December 19th. I need your help to make it a reality!