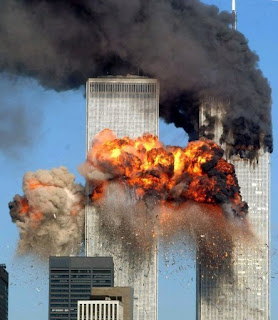 On September 11, 2001, terrorists affiliated with Al-Quaeda and inspired by a desire to spread their perverted Islamist ideology brutally murdered over 3,000 Americans by hijacking passenger jets and crashing them into buildings. This unmitigated and unjustifiable act of terrorism must never be forgotten, and we as Americans must never cease our efforts to wipe out those responsible and those who would follow in their footsteps. These were not just "violent extremists", but rather were motivated by a particular ideology, and we ignore that fact at our peril.

Email ThisBlogThis!Share to TwitterShare to FacebookShare to Pinterest
Labels: history