Review: Marvel's Agents of SHIELD S3E2 "Purpose in the Machine"

This show just keeps getting better and better. People who gave up on it during the slow first season, get back on it. Now. You don't know what you're missing.

Spoilers for this week's episode below the fold. Avante!


This episode finally caught us up on several different plots that have been dangling since the end of the last season, namely what's been going on with Ward and May, as well as quickly resolving the big mystery about what happened to Simmons. I'm very glad they didn't decide to drag that out over three or four episodes, showing her running through a blue sandstorm. They've really got the pacing down for this show. 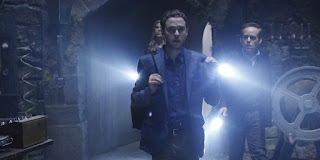 While I enjoyed seeing our favorite exiled Asgardian, Elliot Randolph, again, for me the most compelling story line in the episode was Ward starting to rebuild Hydra, after it got pretty much wrecked last season and in Avengers: Age of Ultron. They not only showed off his ruthless side (being willing to sacrifice the guy who seemed to be his right-hand man just to see if von Strucker the Younger had the guts to kill him) but seems to have finally settled the question of whose side Ward was on. Remember, there was a time when it seemed like it was possible he was simply with Hydra because his mentor, Garrett, was there. But now it seems like Ward has fully embraced Hydra, and is going to remake it in his image. Lean, mean, and with a laser focus on the goal.

The question becomes, what will Ward's ultimate goal with Hydra be?

The scenes with May and her father were really good, and I'm glad to see her finally get some actual character development besides "she's a mysterious badass". Looking forward to more with that.

I have to say though, that Daisy/Skye seems to be reinvented every season, and I wish they'd just settle on a role for her. Leader of the Secret Warriors seems to be a good place to land. Let's keep her there and let her grow into that role. I did like the way they were able to use her quake powers to substitute for the Victorian resonance machine; fit in very nicely, and solved the riddle of what the monolith was, and how it worked. Snappy. Not dragging things out a whole season. Good.

I thought the touches of humor were right-on. Coulson's quip about the SHIELD logos on the vehicles, Elliot's dead pan "he did it" after ripping his cell door off the hinges, all really nice.

All in all, this episode really worked for me. This show is one of those that doesn't get DVR'd for later viewing.