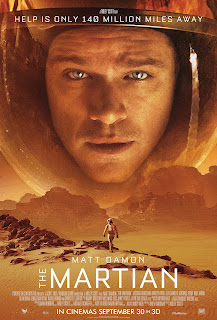 Director Ridley Scott's The Martian opened this weekend (currently sporting a 94% fresh rating at Rotten Tomatoes), and I got to see a morning matinee. I saw it without 3D. Even before lunch, the theater was nearly full, which is saying something. I can easily say this was the best movie I've seen all year, handily beating out Avengers: Age of Ultron, and Ant Man, both of which I really liked. In fact, I would put this as one of my top ten films I've ever seen.

To give the briefest possible synopsis: Matt Damon is astronaut Mark Watney, a member of the Ares III expedition to Mars. When the mission is aborted because of a powerful sandstorm, Watney is left behind, presumed killed by the storm. But he's very much alive, and stranded on Mars, with only his wits and the leftover equipment from the base camp to survive.

From such a simple premise, which has been used in movies before this (1969's Marooned and 1995's Apollo 13), comes an absolutely wonderful movie. Much of the film revolves around Watney's attempts to stay alive long enough for the next scheduled Mars mission to arrive in four years. But every time he (and the audience) feel a little confident that he'll make it, a new problem (or catastrophe) arises that has to be overcome. 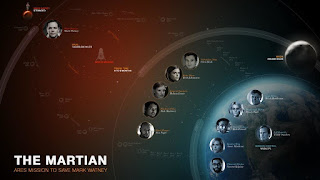 The parallel story on Earth, where NASA (once they realize Watley's still alive) need to find a way to communicate with him, and then to rescue him, is beautifully handled, with the conflicting needs of the government bureaucracy to maintain a good public face, to the technical problems they face, to the issue of dealing with Watley's crewmates, who are on their way home and still think he's dead all played out realistically.

The characters are all well-written and well-acted, and there's a surprising amount of humor thrown in throughout the film, much of it coming from Damon (he keeps a video log which serves as a sort of self-commentary narration, but it's not constant enough to be intrusive), but a lot of it just being the sort of normal banter that you'd expect a bunch of engineers and people dealing with engineers to toss back and forth.

The tension is maintained throughout the whole film, which doesn't waste any time in putting the situation into play. There's a little back-and-forth between the crew to establish the sort of relationships that any six people would have after 400 days together in space, and five minutes later they're running for their lives to get off the planet. The commander's sense of loss at having to leave a crewman behind is well played, and the film (wisely, in my opinion) doesn't play the "I have to get back to my wife and kids" angle; as far as we can tell, Watley's a bachelor. That keeps everything focused on survival. 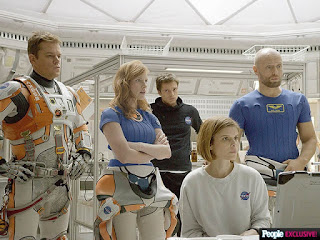 This is definitely a pro-science, pro-space movie. It makes me grieve for the state of our current space program, and the fact that what seems like pretty sensible, feasible technology (even the Hermes, the base ship that shuttles between Mars and Earth, seems plausible, if expensive) makes what we can, or can't, do all the more poignant. Hell, it makes me regret my own life choices, that I didn't angle for a career at NASA somehow, coming out of college.

The film is about the triumph of human ingenuity, the sense of scientific cooperation crossing international rivalries, and the sense that if you just keep solving one little problem at a time, methodically, you'll eventually wind up with no more problems to face. Until Mars tries to kill you again, that is.

Five stars out of five. Go see this film. It's a masterpiece.