Is Spider-Girl coming to the MCU?

So, there's been quite a hullabaloo lately about the 2015 Marvel character poster (click to embiggen): 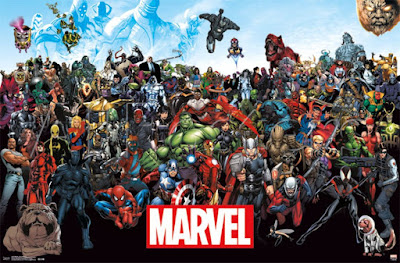 Some folks are claiming (and they're probably correct) that Marvel is deliberately sidelining characters for which they do not own the film rights. So, unlike years past, there's no Fantastic Four, Deadpool, or X-Men (or any mutants) in the poster at all. Similar things are apparently happening with toys.

And I'm okay with that. Marvel's a business, in it to make money, and if they can apply subtle pressure on Fox to get them to give up some of their Marvel properties, they certainly have that right.

However, I will point out that if the new Fantastic Four reboot film tanks at the box office, it will not be because there's no Mr. Fantastic on a poster. It will tank because the film itself sucks. Just as when X-Men Apocalypse comes out, it will make a pile of money not because of comic book sales, but because it's a great film. Comic books are minuscule, financially speaking, compared to films.

Now, lost in all the discussion about the characters that aren't on the poster is something I noticed about one of the characters that is on the poster. The front three or four ranks are filled with characters who have either appeared, or who will appear, on television, Netflix, or film.There are Inhumans, and Defenders, and Avengers, and Spider-Man, and Guardians of the Galaxy, and Black Panther, and Captain Marvel, and Ant Man, and the Winter Soldier, and Loki, and... Spider-Girl.

Bottom right, just behind Cosmo, the telepathic dog we saw in GotG.

Now this is purely speculation, of course, and it's way too easy to read way too much into the characters chosen for a poster, but putting Spider Girl in the very front rank? That seems an odd choice when they're clearly choosing characters that feature in the MCU.

Could we see Spider-Girl in Captain America Civil War next year? There are already rumors that'll be the introduction of Spider-Man. I wouldn't be a bit surprised if Spider-Girl, in her Anya Corazon form, doesn't show up as a cameo, perhaps more. A female Latina character? The suits would like the optics of that...