Speak Out with your Geek Out: Star Trek and Me

I'm sure many of my readers are familiar with the Speak Out With your Geek Out campaign currently sweeping selected corners of the blogosphere and beyond. If not, well, http://www.speakoutwithyourgeekout.com will have all the salient information for you.

There are quite a few topics I could write about on this one, as you might imagine. Wargaming, my early love of computers (back in the 1970's, when all I had to work with was a teletype terminal connected to a HP 2000F timeshare machine the size of a room, at our local school board), and of course role-playing. But I'm going to talk about what I think was the first geekiness in my life. 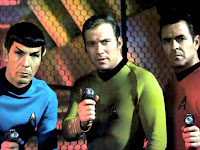 Over the years my love of Trek never diminished, and gradually turned into full-blown fandom. Conventions, uniforms, Trek-related games, fan clubs (I performed a wedding at a Shore Leave convention in Maryland, dressed as a Mirror Universe chaplain; "Let us prey... upon those who are weaker than ourselves..."). In fact, it was while in a Star Trek fan club that I met my wife*, and to this day some of my closest friends stem from those grand days of friendship and fellowship, built around our mutual obsession. Sure, I'm a fan of most if not all science fiction that comes down the pike, and Star Wars holds a place dear in my heart, Dr. Who is mostly great, but to this day I'll watch Star Trek if it's on in any form; whether it be one of the series (yes, I even like Star Trek Voyager), the movies, or even a special on a channel like Biography. My wife and I currently have our "can't miss together time" around watching Star Trek Deep Space Nine on DVD from start to finish.

So there's my Geek Out. Trek's made a lasting impression on my life, and made me some of the best friends I've had. And I don't think it's any odder than being able to quote baseball statistics or spending hundreds of dollars on football tickets.

__________
* The first year we were married, we both tried to get the other a print of "New Borg City" for Christmas. Trouble is, the store only had one, and we were both trying to do it behind the other's back! It was a hoot once we and the guys at the store all realized what was going on.