This Day in History

I don't normally do these sorts of "this day in history" posts, but I've been on a history kick lately, and today is a real biggie with connections to both science fiction and military (wargaming) history. 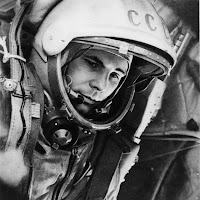 Today marks the 50th anniversary of one of the most significant achievements in human history.

On this day in 1961, Yuri Gagarin became the first human to ever travel in space, opening up the era of human spaceflight. He is quoted as having said, "Someone who never met God on Earth, would never meet Him in space."

Today also marks the 150th anniversary of one of the most significant dates in American history.


On this day in 1861, Confederate troops began the shelling of Fort Sumter, SC, inaugurating the Civil War. There were no casualties during the actual bombardment of the fort, but two Union soldiers were accidentally killed during the surrender ceremonies. 620,000 American soldiers (on both sides) would end up being killed, as well as an indeterminate number of civilians.

Email ThisBlogThis!Share to TwitterShare to FacebookShare to Pinterest
Labels: history