I'm a huge fan of Frank Herbert's Dune (not so much a fan of the books that his son has churned out in the years after his death, although perhaps not quite so much a non-fan as some people), both the books and both film adaptations. My wife was kind enough to share the following with me (a parody of the children's classic "Goodnight Moon"), and I thought it so clever that I'd share it with you, too. Click the image to see the whole thing. If you look at the images closely, there's a lot tucked away there that doesn't get it's own "goodnight." Great stuff. 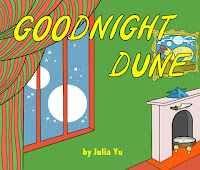