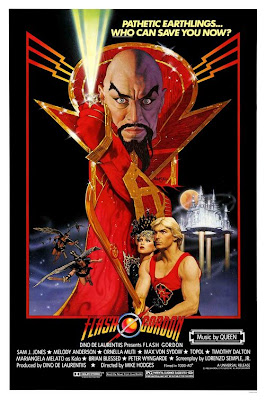 I never did get a chance to see it in the theater, but once Flash Gordon hit HBO and Cinemax, I was hooked. It's more than a little campy, but it's everything a sci-fi action adventure film should be. It's big, it's loud, and it's colorful (both literally and in terms of the characters). And it's just a whole ton of fun, impossible to take seriously, and nobody faults it for that.

NY Jets quarterback "Flash" Gordon (Sam J. Jones) and travel agent Dale Arden (Melody Anderson) are kidnapped by disgraced scientist Hans Zarkov (Topol) and taken into space to discover what's behind the sudden shift in the moon's orbit, which will soon bring it into collision with Earth. They make it to the planet Mongo, where they are brought before Ming the Merciless (Max von Sydow). After an entertaining fight, Gordon is executed, then revived by Ming's daughter, Aura, and taken to Arboria, the moon of Mongo ruled by Prince Barin (Timothy Dalton). He's imprisoned, escapes, and is captured, along with Barin, and taken to the flying city of the Hawkmen, ruled by Prince Vultan (Brian Blessed). There, Barin and Gordon are forced to fight, end up killing Ming's #2 man, Klytus, and the Hawkmen are forced to flee before the Imperial fleet arrives to blow the city to atoms. Left to die in the city by Ming, Gordon finally escapes and convinces Barin and Vultan to work together to overthrow Ming. They stage an attack on Mongo city just as Ming is to wed Dale. Gordon kills Ming, and the Earth is saved. Whew!

This movie has a lot of great things going for it. The cast is first-rate. Brian Blessed made a career out of this performance, and Max von Sydow looks more like Ming the Merciless than the comic strips or the original serials from the 1930's. The production, although it looks a little dated 30 years later (where we are used to dark, grimy, and worn sets, costumes, and props), is glorious in its own way, with lots of bright primary colors and metallic trim. In this respect, it's not unlike Buck Rogers, which came out the year before, and was also based on a 1930's serial.

One of the most outstanding elements of this film is the soundtrack, performed by Queen. Yes, the guys who gave us Bohemian Rhapsody and Fat Bottomed Girls provide the rocking vocals and bass for this film, and it's so over the top that it fits perfectly. The film strikes a tone of being campy, but not absurdly so, and there is enough menace in Ming and Clytus, and characters such as Vultan are so well chiseled, that the whole thing just works. Once again, nothing great and deep here, but it's a hell of a ride, and if you've not seen it before, you should give it a whirl.