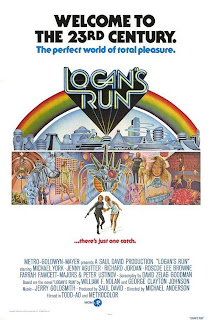 I actually had the opportunity to see 1976's Logan's Run in the theater when I was visiting cousins out in Omaha. (Yes, I'm that old.) Based on a novel by William F. Nolan, the film takes place in a future where an idyllic society dwells in a magnificent domed city, last remnants of the human race who have forgotten what "outside" even is. The population is devoted to a hedonistic lifestyle, with all its needs and desires catered to.

At the Love Shop, one can participate in a never-ending orgy enhanced by psychedelic (and probably psychotropic) substances. At the New You, one can have their face or even their entire body redesigned, in case they get bored with what they have. (That, I should point out, is a very Transhumanist idea; the concept of morphological freedom is central to Transhumanism.) One can put ones self "on the circuit", to be instantly transported into the living quarters of others who are looking for casual (and, it is presumed, completely safe) sex. There is no intimation of limits on food or other forms of leisure.

But to quote the film's trailer, "there's just one catch..."

In order to maintain the perfect balance of this society, when you turn 30, you must submit yourself to the ritual of Carousel. Each human is fitted with a crystalline "life clock" in their palm at birth, which passes through different colors as you age; yellow, green, and finally red. When it turns black, you have reached 30 and must die. Carousel is your chance at reincarnation; the exact mechanisms or criteria are not specified, but the notion is that everyone has at least some chance at being reborn.

Those who balk at the prospect of rebirth on Carousel, however, are "runners", who have developed an entire sub-culture aimed at protecting one another and helping runners escape the city to Sanctuary (a "pre-Catastrophe code word for a place of refuge", we are told). Our hero, Logan 5 (played by now-veteran actor Michael York) is a Sandman; one of the elite police who hunt down runners and terminate them.

Logan is selected by the city's controlling central computer to infiltrate the runner organization, find Sanctuary, and destroy it. He befriends Jessica 6, whom he believes to be a member of the organization, but eventually betrays his mission, not only because he falls in love with Jessica, but also because the computer has robbed him of the remaining three years of his life, in order to turn his life clock blinking, signaling he is ready for Carousel. Together, he and Jessica escape the city (pursued by Logan's best friend Francis 7), come to the realization that there is no Sanctuary (all of the previous runners had been killed by the cyborg Box), find one of the few remaining humans in "outside" (the Old Man, in an incredible performance by Peter Ustinov), return to the domed city and manage to overthrow the computer and bring the population "outside". 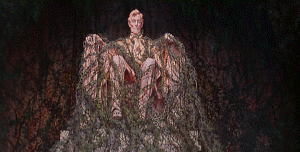 Much as I love it, the film is very dated visually. The costumes and hair styles fairly scream the mid-70's, and the special effects shots are, in retrospect, pretty awful. The establishing shots of the domed city look like a model train set (which, as you see the tube-traveling maze-cars, they are), and there is some blue screen effects when Box's cave is destroyed that just looks terrible. But in 1976, when I was 10, and most critically before Star Wars set a new standard for special effects; for a brief window, this was unbelievably good stuff.I must say though, that the vine-covered image of the Lincoln Memorial is terrific, and easily as iconic as the Statue of Liberty from the end of Planet of the Apes.

This film has some obvious social commentary, and some that is not so obvious. The obvious is the heavy-handed message about the dangers of the "youth culture" that had so taken control of America with the tsunami-like influence of the Baby Boom. When the film was released, those Baby Boomers were just hitting 30 themselves; the message of "if we let these kids have their way, this is what society would end up like" is palpable. Just about the only film I can think of that addresses the issue even more overtly is 1968's Wild in the Streets. The SS-like uniforms of the Sandmen play into the idea that what seems like a Utopia is, in fact, a Dystopia; the promise of unlimited freedom is shown to indeed have a limitation that overwhelms any benefit that the system might provide for its people. This is the Tyranny of the Twenty-somethings.

But the film also has some much more subtle messages to give. There is Cathedral; a dome that is locked down and abandoned, home to nothing more than a band of renegade social misfits (the "cubs"). They are violent and abandoned, using the drug "muscle" (whose nature is left unexplored in the film, but which is mentioned in some detail in the original novel on which the film was based). The fact that Cathedral is a wasteland into which the outcasts are condemned is a nice way of showing that religion has been completely abandoned in the society of the domed city, but also a reminder that it must have once played some role (doubtless at the founding of the city) or else the Cathedral dome itself would not exist.

Apparently the city is not completely work-free; some level of service is still required of at least some folks. There are the folks who work at the New You, for instance, the guys who fly around melting dead runners into slag, and of course the Sandmen themselves. They don't really go into the mechanics of that, though; does everyone need to do a stint working?

There was also a pretty bad (as I recall; it's been a LONG time since I've actually seen it) television show based on the series, and as I mentioned the film was based on a novel. I actually read the novel when the film came out, and boy is it different. The world outside is much more populated and active than the film version, and Sanctuary actually exists. There was also something with a Gettysburg Civil War reinactment or something, but it's been years...

For all that the effects are dated, I still love this film. The acting is pretty decent (well, except for Farah Fawcett, who has a cameo as Holly-- it was 1976 after all) and the story still compels. I could see taking elements of this for a game of Paranoia or something of that ilk. Or maybe a Mutant Future game where the players come across the domed city and gain entrance somehow. "How old are you?" takes on a much more sinister aspect in that scenario... Oh, and naturally, there's a remake said to be in the works. Le sigh.