Two Films From The 80's Getting Sequels

Back in the early 1980's, there were two films that made the rounds on HBO and Cinemax that really got my D&D blood racing and which in retrospect I see had a great influence on my gaming at the time. 1980 saw Hawk the Slayer, staring John Terry as the noble Prince Hawk and Jack Palance as his villainous brother Voltan (complete with Darth Vader-esque helm). It is usually considered just another cheesy swords-and-sorcery flick, but I find a lot of good stuff there. 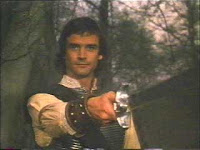 The music is rousing, if a little over-the-top at times. The special effects are definitely wanting, but are made up for by the earnestness of the cast and a pretty good job of acting all around. Jack Palance in particular gives an over-the-top performance that chews the scenery in a way worthy of Ricardo Montalban in Wrath of Khan.

But what I really like about the film is the way it uses the now-standard idea of the party of adventurers gearing up for a quest. Each is introduced in his own vingette, and these serve to give color to a band that could easily have been nothing more than a Greek chorus or reflection of the leader's coolness. There is good humor (particularly in the interactions between Baldin the dwarf and Gort the giant) and you really get the idea that these characters have known one another for years. The plot is pretty standard; Voltan has kidnapped an Abbess, and Hawk and company must rescue her. But there is much more going on under the surface; Voltan's son is plotting to usurp him, flashbacks show us the root of Hawk's vendetta against his brother, and we see a world where the magic is slowly going away and so are the elves. 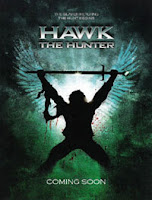 The scenes where the good guys get the gold they need for the ransom from the slavers are terrific, and show us that the good guys aren't always so good. The image of the Medevial-like church with its Holy Fortress stuck with me for a long time as a model for my own D&D campaigns, and many of my maps had a River Shale and Forest of Wyr.
And now it turns out that the original director is coming out with a sequel! Hawk the Hunter won't star the original John Terry (which is a shame, and somewhat curious, as he's still acting; he recently played a doctor in a series of flashbacks on Lost). I have no idea what the plot is going to be like, but it's being done by the same director as the original (Terry Marcel), and they have cast Tom Hardy (Shinzon from the utterly forgettable Star Trek: Nemesis) as Hawk. And it actually has a budget of $2 million! Can't wait.

Much as I adore Hawk the Slayer, 1982 gave us The Sword and the Sorcerer, which was a much better film overall. The acting is better, the action is better, and the special effects, although certainly not stupendous, are better. Once again, the key to my mind is the fact that there is a lot of implied backstory. You get the impression that Talon's men (Prince Talon-- one wonders why there is such a surfeit of princes in these films) have been boon companions for years, and the pirates they encounter in the city have of course followed Talon in the past and will gladly do so again.
The humor is important, but it doesn't overwhelm the film. One scene stands out in my memory in particular; Talon has been captured, and his men have enlisted the aid of the afore-mentioned pirates to help break him out of the evil king Cromwell's dungeons. They cheer and leave the tavern with murder on their minds and with a resolve that nothing will stop them! Cut to all of them in a cell, captured. Hilarious, because it's done in such a deadpan fashion. But because the film doesn't present itself as a comedy, even self-depricatingly, the humor works.
And of course this is one of the standards of the genre, especially where it intersects with gaming tropes. The evil king, the rebellion brewing among his oppressed subjects, the plot twists around Count Michelli... great stuff and all very usable in a gaming situation. 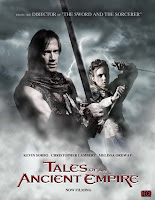 And yet again, there's a sequel in the works by the original director! However, instead of replacing the lead character like they're doing in the Hawk sequel, the original Prince Talon (Lee Horsely) will appear in a sort of cameo to hand the reins off to Kevin Sorbo as the new hero. I don't get this, personally. Lee Horsely is only 54 himself, and I would think they could get a lot of mileage out of the old hero coming back for one last adventure theme. And it's not like Kevin Sorbo is a spring chicken. I mean, I liked Hercules and Andromeda well enough, but he's only three years younger than Horsely. Once more, this one promises to be bigger, and better, and have a larger budget. Another must-see.
There were plenty of other films from the era that influenced my gaming, of course; The Archer: Fugitive from the Empire and The Beastmaster foremost among them. But these two have a special place in my heart, and the fact that they are being revived (rather than remade) could be a very good thing indeed.
EDIT: I just remembered that 1982's The Dark Crystal is also getting a sequel, due out in 2011. The Power of the Dark Crystal has apparently made it out of pre-production, so it's a definite go. Is this some sort of trend? What's next; E.T.: The Return?